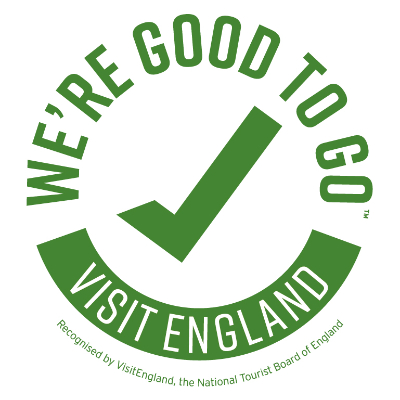 In Partnership with The National Tourist Organisation of Great Britain and Northern Ireland.

In recognition that this business has confirmed that they have followed government and industry COVID-19 guidelines, ensuring processes are in place to maintain cleanliness and aid social/physical distancing.

Ahoy there! If you're looking for UK beach breaks, activity breaks or just accommodation near Whitby and Robin Hood's Bay, YHA Boggle Hole could be just the place for you. Tucked away in an old smuggler’s cove, our lovely Old Mill will delight and inspire you, with its treasure trails, stunning sea views and wooded grounds for the kids to explore.

Once safely indoors, treat yourself in our well-stocked Quarterdeck café, and enjoy the warmth of the woodburning stove when the weather is cooler. Dorms are not currently available.

Our main hostel building is full of character, charm, and a fascinating history. The mill comprises 42 beds shared between rooms of all sizes, with all the usual Youth Hostel facilities plus a sandpit, mermaid, old boat, and pirates. There are also picnic areas, lovely peaceful spots to read, a courtyard where you can eat on sunny days (it rarely rains) and a beach on the doorstep (and we mean on the doorstep).

YHA Boggle Hole underwent a £1.2million renovation in 2015. After our eight-month refurbishment, you can now: Built in 2015, this environmentally friendly building comprises 44 beds, with a mixture of family rooms, en-suite rooms and traditional dorm beds, boasting fantastic valley views. There is a kitchenette area with some bench seating and long tables.

All en-suite rooms at YHA Boggle Hole are in The Crow's Nest up a large flight of steep steps. It is recommended that families supervise young children on the steps.

YHA Boggle Hole is serving a range of tasty food options, including breakfast baps, continental breakfast and a café style menu, for you to enjoy during your visit. A takeaway service is also available.

Breakfast is the most important meal of the day and we want to make sure you get off to a great start, so we are now serving delicious breakfast baps and a continental option. Vegetarian and vegan options available.

Delve into our café style menu with plenty of delicious options, including paninis, light bites, stone-baked pizzas, and much more. Vegetarian and vegan options available.

Things to do around YHA Boggle Hole Try rock pooling, fossil hunting and playing on the beach making sandcastles, all a stone's throw from the hostel. Noted as a great place to swim in the Wild Swimming book. The sea at Boggle Hole is exhilarating, and perishing, all at once. Cast from the window of your room (almost!) and spend the whole day staring wistfully out to sea. Whitby is a lovely, seaside town dominated by the abbey ruins high on the hill. 199 steps lead to the churchyard that inspired Bram Stoker to write 'Dracula'. Walking and Rambling around Boggle Hole

The Cleveland Way passes the hostel doorstep and YHA Boggle Hole is the traditional finish on Wainright's Coast to Coast walk. Take a leisurely cycle along the National Cycle Route 1 or the North Sea trail which starts 10 minutes away from the hostel. Step out of your room and into the sea and more importantly, you can then step out of the sea into a lovely hot shower! Walks with a story in Yorkshire

Explore more of the area with Discovering Britain’s walks, trails and views. From stunning viewpoints to family-friendly strolls, from day long hikes in the countryside to urban trails – there's pl Discover our underwater world and meet the land creatures including Otters, Seals and Humboldt Penguins. Visit the website A unique tour through the Dracula story and the connection to Whitby. Using animation, special effects and live actors.       Visit the website

See the splendour of our next door attraction! Discover its history, hear voices from the past on the audio guide and catch unique events Visit the website Moorsbus (around Helmsley & other hostels)

A fantastic community run bus service connecting surrounding towns within the North York Moors allowing you to leave your car at home.  The services run on Fridays, Saturdays, Sundays and Bank Ho One of the oldest purpose-built museums in Britain, the museum has been a focal point for geology and local history since 1829. Visit the website The museum is in a 17th century house on Whitby's harbour where Captain Cook trained as a seaman, leading to his epic voyages of discovery. Visit the Museum website

Closed facilities: The following facilities are temporarily closed at this hostel due to COVID-19 safety measures - drying room(s), laundry room(s).

Open every day?: No

Parking: Parking is 500m away and a brisk walk down to the sea and the hostel. Because there are no street lights, you'll need a torch after dark.

Dogs: Pets are not permitted at YHA Boggle Hole. Assistance dogs are welcome.

YHA Boggle Hole is close to the Yorkshire Heritage Coast, providing plenty of opportunities for students to have dozens of enjoyable learning experiences! The hostel accommodates 85 people, has internet access, fantastic classroom facilities and group catering is available. Visit the YHA School Trips website to book your field trip.

Volunteering with YHA is a fantastic way to have fun, learn new skills, boost your CV and travel to different places. We have a variety of different opportunities to choose from and volunteering roles to suit everyone.

The tasks are varied and in return you will meet some great people, who both work and stay in our hostels, as well as enjoying your time off discovering the local area and attractions. Find out more and apply to volunteer at this hostel on the volunteering website.

It is believed that the Farsyde family built Bay Mill, the main youth hostel building, to serve the estate's own farms. The first mention of two mills in the parish appears in the marriage settlement of Sir Hugh Cholmley in 1666, where low mill is almost certainly Bay Mill. The other mill is believed to be Ramsdale Mill which has been restored. In 1712 a lease refers to ‘Bay Mill or ‘Low Mill’.

The mill would have originally been a wooden structure and much smaller than at present, with the wheel run directly by the beck. Certainly a later Farsyde rebuilt the mill into something like its present form. An inscription (which is now seriously weathered) over the dining room door reads “This Mill was rebuilt and new machinery put therein at the cost of G. W. Farsyde Esq. AD 1839”.

On August 6th 1857, a tremendous rainstorm caused violent floods which destroyed some buildings at both Ramsdale and Bay Mills. Mr Farsyde’s substantial building of 1839 survived but the miller's house, believed to be situated on the other side of the stream, and some wooden outbuildings were destroyed and washed away. The housekeeper, Elizabeth Knaggs, and a dog were both drowned.

At the time, the miller had two apprentices named Hutton. The son of one of them, Halder Hutton told a story related by his father of how the two brothers rescued a baby from the miller’s house just before it was destroyed. It was probably after this that the miller’s house was re-sited at right angles to the main building. It comprised what is now the main hostel kitchen and the rooms above. The land surrounding the mill on both sides of the beck were farmed, mostly for grazing of cattle and sheep. There was also an orchard and garden for fruit and vegetables alongside the path which leads to Farsyde House.

Farm buildings surrounded the courtyard and these have since long vanished apart from one which has been substantially rebuilt to form the current staff bungalow.

There is no record of when the dam was built but it was constructed on the site of a natural waterfall. It held back a considerable body of water. The lake has long since silted up.

In the late 19th and early 20th centuries, gangs of men were employed from time to time in the dry season to dig out the silt and ensure a constant supply of water for the mill.

Water ran from the dam in an underground passage to the present self-catering kitchen. It entered the building where the present window and extractor are, powering the wheel which filled this room and the cellar below. The water than ran out into the beck.

The main drive shaft extended into what is now the dining room and drove four pairs of stones set into the floor of what is now the toilet and showers on the reception level.

Near the top of the dam, in the bank side there is still a dry shaft. This was the entry to the sluice gate which allowed the water to be let into the underground passage and power the mill. A secondary gate with a diversion into the back has also been found under what is now the picnic area behind the hostel.

On top of the dam is a large cast iron wheel which allowed the dam gates to be opened. The missing one is actually in the pool behind the dam and is visible  at very low water.

The custodians of Boggle Mill, Peta and Andy, have worked here for about 20 years (this means they must have started when they were 10!). They make lots of the furniture and decorations and are more than happy to chat about them. They have lived in the area for ages and can recommend lots of things to do and places to see (although playing on the beach is the best)! Our lovely crew will look after you if you need anything many have been here for a long time as well so know the area and its charms and best secret spots as well.

Manager recommends: For a real family beach break, spend your free time playing and walking along the beach to Robin Hood's Bay, searching for fossils and Whitby Jet, swimming in the sea and beachcombing for ‘washed up treasures'. Take a packed lunch and spend the whole day away from the hustle and bustle of the real world - and enjoy the delights of a UK coastal holiday!

The coastal erosion and access improvement work on the Cleveland Way at Boggle Hole has been part funded by the European Agricultural Fund for Rural Development.